Irzazen News
الرئيسية Droits de l'homme In Algeria, a poet and a revolution 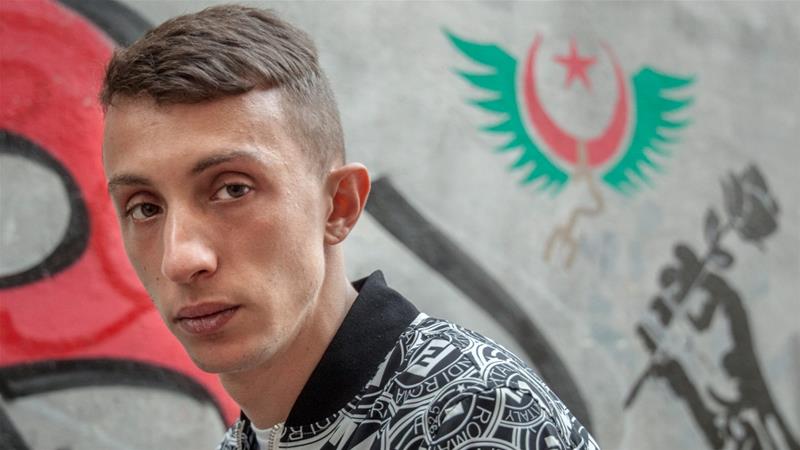 On the anniversary of Algeria’s Hirak Movement, a poet and former political prisoner explains why the protests continue.

‘Just trying to get by’

Before the weekly protests began last February, in response to an announcement that President Abdelaziz Bouteflika would seek a fifth term in office, Tadjadit was working as a fruit seller and did not have much interest in politics.

« I was just trying to get by, » he admits in a hesitant, almost shy, voice.

He was born and raised in the Casbah of Algiers, although his family was relocated to the outskirts of the capital when the building they were living in collapsed two years ago.

Tadjadit dropped out of school when he was 14 and took on various jobs – selling umbrellas and knock-off jewellery, working at a fishery and a tannery.

He started writing poems at the same age, but there was nothing political about them.

Tadjadit started writing poetry at a young age. Now many of his poems include a political message [Lydia Saidi / Al Jazeera]

He checks his phone as he talks, reading messages from other activists inviting him to one event or another, and walks too close to the edge of the pavement for the liking of his friends.

He is now the author of more than 50 poems, many of which contain powerful political messages.

And, while he may not have given much thought to politics while he was growing up, he felt the consequences of his country’s politics as forcefully as many other young Algerians.

With no opportunities at home, when he was 22, he tried to illegally immigrate to Europe. He first went to Turkey, then tried to reach Western Europe. He was arrested in Greece and sent back to Algeria.

When the protests started, Tadjadit began reciting his poems at them. He became well known when videos of him started making the rounds on social media. But he became even more famous after he was arrested on November 14 and charged with « undermining national unity ».

In early April, when Bouteflika was forced, under pressure from the country’s powerful military, to tender his resignation, the story of Algeria’s protests – unprecedented in its modern history – fell off the international news agenda.

But the protests did not stop.

Friday marked the 53rd straight weekend of peaceful demonstrations demanding full regime change. Protests will also take place on Saturday, the first anniversary of the movement that became known as the Revolution of Smiles or the Hirak Movement.

On December 12, former prime minister and Bouteflika loyalist Abdelmadjid Tebboune was elected president amid ongoing, widespread protests. Only 40 percent of the 24 million people eligible to vote did so.

Among the protesters, it is widely believed that the military made him head of state in order to give a civilian facade to the ruling regime.

« The military rule will be removed / And the mafia State will fall / The people are proud and will never be broken / They only want to clean their nation, » wrote Tadjadit in one of his poems, echoing one of the protest movement’s main slogans: « A civil state, not a military one. »

On December 19, the same day that Tebboune was inaugurated, promising to « satisfy all the demands » of the protesters, Tadjadit was sentenced to 18 months in prison.

He was detained in the El Harrach prison in Algiers, in conditions he describes as « inhumane ».

He recalls one occasion when there was no water for four days. When he asked the prison director about it, he says he told him the water supply was disrupted, even outside of the prison. « When you’re outside, you go out and you buy water. We’re in prison here! » Tadjadit replied.

The country’s new president made promises that ranged from solving the housing crisis to proposing a new constitution that will « pave the way for a new Algeria ». He formed a government and chose a minister of commerce, Kamel Rezig, who picked the price of milk as his first battle.

But, says Tadjadit: « This is not about milk or housing. This is about building a nation. »

« We are not satisfied and we will never be, whatever they try to do. The whole regime is corrupt and they need to go away. »

Even though, in early January, Tadjadit and 66 other detainees were freed pending an appeal against their convictions, the contrast between an official government discourse that praises the protesters – on Thursday, Tebboune commended « the blessed Hirak » – while seemingly trying to stifle them via police pressure and a media blackout, has done little to persuade people that real change has taken place.

Tadjadit’s appeal trial was scheduled for mid-February, but he postponed it until the end of the month so as not to miss the anniversary commemorations. « I don’t care if they send me back to prison, » he says. « I just want to be free on February 22nd and I want the Hirak to intensify its action. »

A leaderless movement for ‘freedom’

Hundreds of thousands of people showed up to the protests in Algiers on Friday, a number comparable to the first weeks of the movement.

Like Tadjadit, many of the protesters are adamant that their movement will continue until their goals are met.

For Amel Boubekeur, a researcher of sociology at the Ecole des Hautes Etudes en Sciences Sociales in Paris, two things are keeping the protesters motivated. The first is the knowledge that they are taking part in something of historical importance that may never happen again. The second is an incentive that has been provided by the government itself. Even though the demonstrations have remained peaceful, the researcher believes the authorities are « afraid » of the protesters.

« They keep viewing the Hirak as a security problem and it prevents them from thinking in political terms. It’s not a very smart strategy, » she explains.

« As long as there is a duality between formal reforms, like amending the constitution, and informal practices of management, the Hirak will have fuel to continue. »

Tadjadit, like many others who have become well known during the protests, may hold a degree of influence, but most protesters reject any form of representation. The movement began with anonymous calls to protest and has continued without any formal leadership since. The protesters have also rejected overtures from opposition parties, whom they consider to be in cahoots with the government.

The protests draw women, men and children of all ages. They may hold different political views but all agree on the need for democratic change. « Freedom » is a word that comes up often in their chants and slogans.

The protests continue to be one of the few spaces where Algerians can exchange ideas and debate freely.

« For me, the Hirak is like a big school, » says Tadjadit. « I met a lot of people with different experiences during this year and they taught me a lot. »

The protesters’ political goals may not have been fully met yet but Tadjadit believes there has been a change in Algerian society.

« We became united, » he says as he lights a cigarette. « There is solidarity among people more than ever and I think this is very important. »

The Hirak gave hope to large sections of the population. In the early weeks of the movement, an image of graffiti was widely shared on social media. It said: « For the first time, I don’t want to leave you, my Algeria. »

Tadjadit says he would only leave if the Hirak fails. « If we don’t succeed, if we don’t free the country, lots of people are going to leave, » he says.

Still, he adds, « If we have to march for another year to snatch our freedom, we will do it. No problem. »